“The Gravel Conspiracy is a free 3 day event that is promoted on the Gravel Conspiracy blog.  The format change a little each year, but the quality of the experience always exceeds expectations.  This year’s event started near Duluth Minnesota with a moving truck full of bikes and a one way bus ride.  A few hours later we were dropped  with our bikes in a gas station parking lot near the Canadian border. The each day the moving truck would haul our gear to the end of each of the three stages. Stages start and finish along the shore of Lake Superior, and crossing over the Laurentian Divide, each day starts with a long climb, and ends with a down hill.

At 1pm our group of 30 riders departed the Grand portage gas station with 65 miles to the end of stage 1. The first stage was dominated by a steady diet of rugged rocky double track and pinch flats. 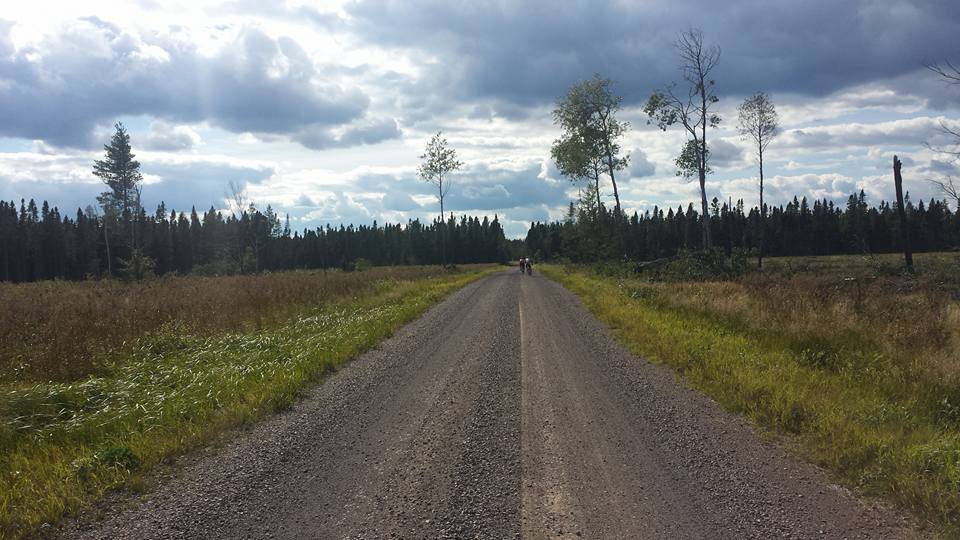 The rocky terrain is more similar to XC mountain biking than gravel. The steep drops and short punchy climbs begged to be ridden fast  like a flow trail.  Long climbs were rewarded with stunning views far into Canada. 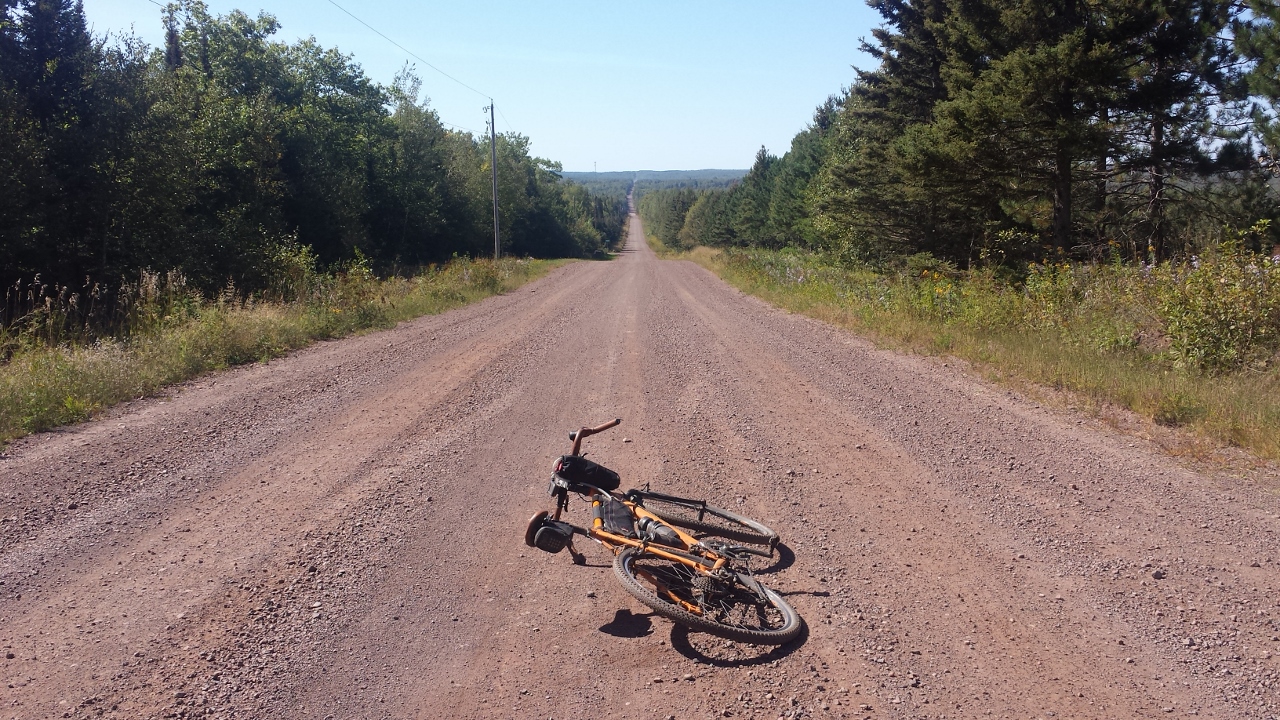 At Pine Mountain road we began 500 foot climb to the high point of the day.  Then began the long downhill ride back to Lake Superior.  Ending with 63 miles and 3,700 feet of climb. We met at the truck in the Grand Marais City camp ground retrieve or camping gear, a cold beer, trade stories the the first day’s adventure. 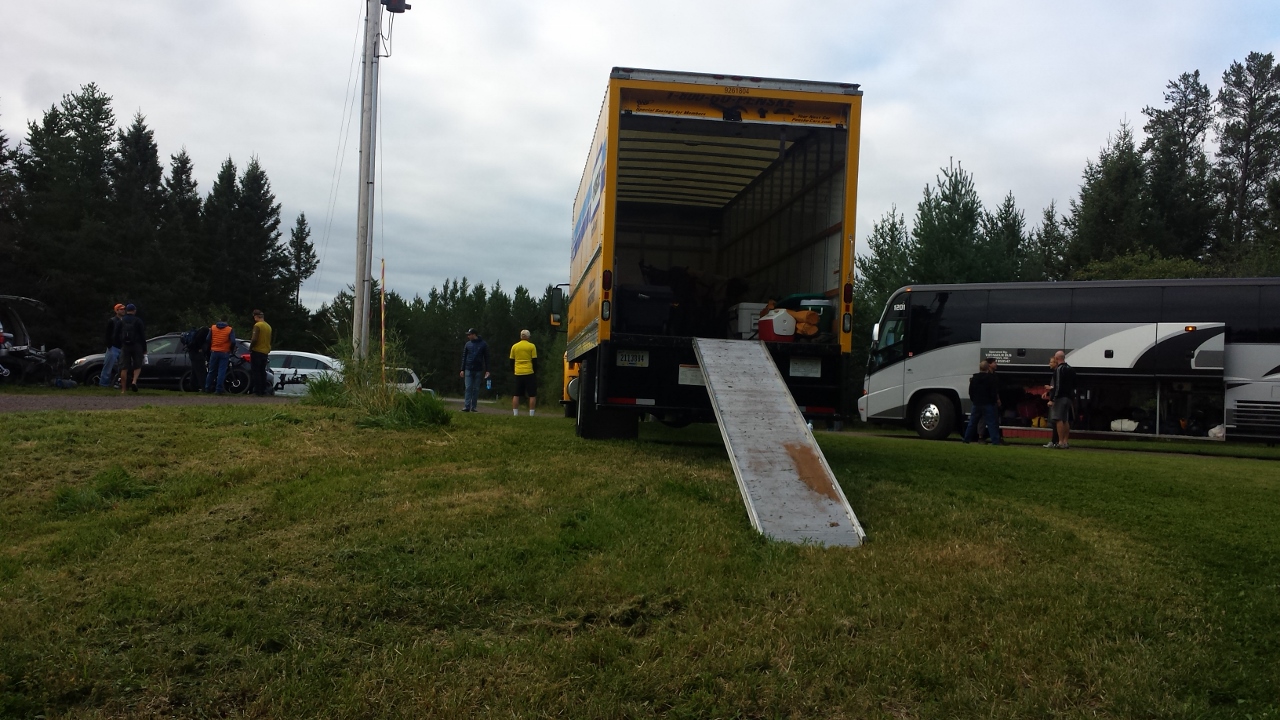 Later we met at the Gun Flint Tavern for dinner and further conversation.

Day 2 began at the truck where several small camp stoves prepared coffee and breakfast.  As the 9 am start time approached riders filled their pockets and frame bags with goodies from the large communal snack pile located in the truck before riding to the start.  Today would be the long day covering over 110 miles and 5,200 ft of elevation.  We were informed at the rider meeting that we would meet the truck at mile 37 and there was a bar at mile 50 were we could have lunch.  At 9 am we began the 1000 foot climb from the lake up and over the ridge.  The route was generally good easy riding gravel with a few sections of muddy rocky double track just for fun.

We met the truck as planned and replenished our supply of snack food. The next road is a challenge to the spirit as you began the 4 long climbs up Six Hundred Road including Heartbreak Hill. A hill know to Break the heart of early loggers due to its difficulty. Last year I made the mistake of attacking this section and paid for it the rest of the day. This year I chose a more modest pace and survived unbroken.  At mile 50 we reached our lunch stop at the Trestle Inn.

Bacon cheeseburgers and fries as a mid ride meal may not be for everyone, but they were perfect that day. By now we I had formed a group of 3 that paced well together and continued across the miles of forest roads and logging trails.

At mile 85 we began a 4 mile section of soft ATV trail that knock our pace down to single digits. Combined with rocks, sand, and mud this section worked to sap the last bit of strength we had left.

Turn by turn the road became wider and easier rolling until we reach Lax Lake.  The final miles went by at 30 miles per hour as we made the quick descent into Silver Bay then further on to our lodging in Beaver Bay. We gathered in our room around pizza and local craft beers to share the day’s stories.  Later we met with other riders in the hotel restaurant for 2nd dinner and dessert.

The route for day 3 was an experimental route designed using Google earth to add the additional distance need to reach 100 km and qualify as a dirt metric. The 65 mile route would return us to where our vehicle were parked need Duluth on a combination of gravel and ATV trails

As the time to leave approached  I was happy to see that a few riders would join me on this longer dirtier route.  We began with a short steep climb of a 500 feet in the first mile, then transitioned to a 7 mile long false flat into a slight wind that split our group of 7 in two. I was riding again with the same group of three as the day before as we reached mile 30 our experimental route rejoined the main group of riders for a fun section of ATV trail.  The 6 miles of trail slowly narrowed down to just a single path and crossed through a creek.

As I rode thought of the end of the Robert Frost poem:

Two roads diverged in a wood, and I—

I took the one less traveled by,

And that has made all the difference.

As we finished the last miles of our journey I thought to the wild nature of the land we had crossed over the last three days, and the friends I shared them with.  This is my  4th completion of the Gravel Conspiracy me, and I have found no other event that compares with regards to the quality of the ride, or the people the people that ride it.”