“I participated in Actif Epica up in Canada this past weekend.  It’s 125km on bike or foot and 165km on bike.  I was in the 165km option.  As the event drew closer, I was concerned what the temp and wind would be.  It started at St. Malo which is 75 miles south of Winnipeg and ends at Two Forks in Winnipeg.  It follows the Crow Wing Trail.  Winnipeg, much like Fargo this year, has had above average temps.  As I checked the weather throughout the week, the low for Saturday morning continued to drop.  The forecast was showing -19 deg F.  Crap!!  I went up there with my good friend Tim Bauer, who was participating in the 125km foot option and is in the Cup O’ Dirt Challenge also!!

At 5:00 am Saturday morning, we boarded a bus in Winnipeg and were transported to St. Malo.  The temp was around -17 deg F.  The wind was from the south and very light.  Thank goodness!!  The people participating in the 125km option departed at 7:00am and the 165km folks were at 8:00am.  I wasn’t quite sure what I had on was going to be warm enough, but I had packed extra clothes as a requirement and as a option. I had a long sleeve base layer, a mid layer and a light biking jacket as a thin shell.  I put two ziplock sandwich bags over my bike computer and threw two hand warmers inside it to help keep it functioning.  On my hand,s I had a thin merino wool liner glove and a lightweight mitten on top of that with a hand warmer.  I was using 45nrth cobrafist pogies on the bike. On my feet, I had Steger mukluks with a thin sock and thick sock, along with a toe warmer. 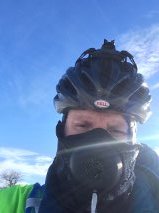 For the 165km we took off and headed south.  It was on a lake, gravel and snowmobile trail.  Within the first 4 miles, my hands were way too hot.  I pulled the mittens off, threw the hand warmers in the pogies and just wore the glove liners. There were sections of the snowmobile trail that were to loose to ride, so I had to walk the bike.

Looking back, this probably helped keep me warm, but at the time I just wanted to be able to ride.  I made it back to the start line which was around mile 20, checked in and took a moment to regroup.  My goggles had fogged up so I cleaned those up.  The route now followed the 125km course.  As I worked my way north, the course followed a mix of minimum maintenance ,field, prairie and gravel roads. 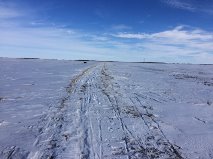 Each town was a checkpoint that had calories, liquids, and wonderful volunteers!! I wanted to take more pictures earlier on, but my phone was too cold.  As the day progressed, the temp rose into the single digits above zero and the wind picked up from the south.  Overall we were headed north, so this was nice. The clothing worked well and there was a lot of open prairie and fields.  I ended up using my mittens most of the day for my hands. 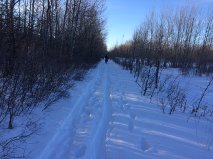 Darkness fell and I put my helmet light on and continued to ride.  At this point, I was on a field road that was following the Red River Floodway.  The route turned to gravel and I trudged on and made it to the University of Manitoba, which was the final checkpoint before the finish.  I refueled and worked my way through Winnipeg.  The last 4 to 5 miles was riding on the Red River.  I made it to the finish in 13 hours and 36 minutes. I had a couple navigation issues and ended up riding 110 miles.  My first winter ultra!!

It was a great experience and I met a lot of great people.  I’m now ready for winter to end and for the spring gravel grinders to begin!!”