“Dirty Century #6. I mentioned to GT that I wanted to do my 6th gravel 100 mile ride on my Surly Pugsley, and he thought that he would like to ride along on his Ti Mukluk. My original plan was to follow the Shell Rock River up to Greene, IA and then South towards Parkersburg, but there was a thunderstorm in the Greene area that week, and several of the roads had been washed out in the flood after the storm. I then decided to follow the route that I had taken to Eldora last year when I rode over to camp the night before riding back with RAGBRAI. I had to work at the fire station the night before, so I didn’t get home from work until after 0800 that morning. It was raining when I texted GT that I was running late, so I would meet him at Byrnes Park instead of the Kwik Star; the rain slacked off to a drizzle by the time I arrived at 0900. We headed out of town on the bike path and we were so busy talking that we missed our first turn. We were able to get back on track via another bike path and we headed West on Ranchero Road for several miles. The drizzle had stopped and the temps were comfortable, so we peeled off our jackets. We rolled through Dike and continued West towards Wellsburg. We stopped at Casey’s in Wellsburg and topped off our water before continuing towards Eldora. The sky was ugly, but the wind wasn’t bad and the temps were saying cool because of the cloud cover. The gravel was in good shape and there were not a lot of hills through this section of the ride. We rolled into Eldora and stopped to use the facilities at the park. One of the locals stopped to remark about the tires on our bikes, and he tried to talk us into visiting the museum while we were in town. We didn’t make any other stops in Eldora and we headed North out of town on the same route that we used on the GTDRI in July. As we rolled down the hill into the Iowa River valley, I noticed that GTs bike was coasting as fast as I could pedal downhill. He was running Surly Big Fat Larrys on his bike while I had the original Nates on my Pugsley. This section of our route had a few steep hills, but it flattened out as we headed East towards Ackley. We skirted the south side of Ackley and continued East. We were paralleling old Hwy 20, so we passed within a mile of Aplington and Parkersburg. We had not stopped to resupply since Wellsburg, and I ran out of water somewhere between Aplington and Parkersburg. We should have ridden into P’burg, but we knew that there was a Casey’s on the route near New Hartford which was about 10 miles away. As we neared New Hartford, I could feel the bonk coming on. I was having a hard time keeping up with GT, and I was kicking myself for not going out of our way and riding into Parkersburg for food and water. We rolled into Casey’s and I bought a quart of chocolate milk and some chicken fingers. 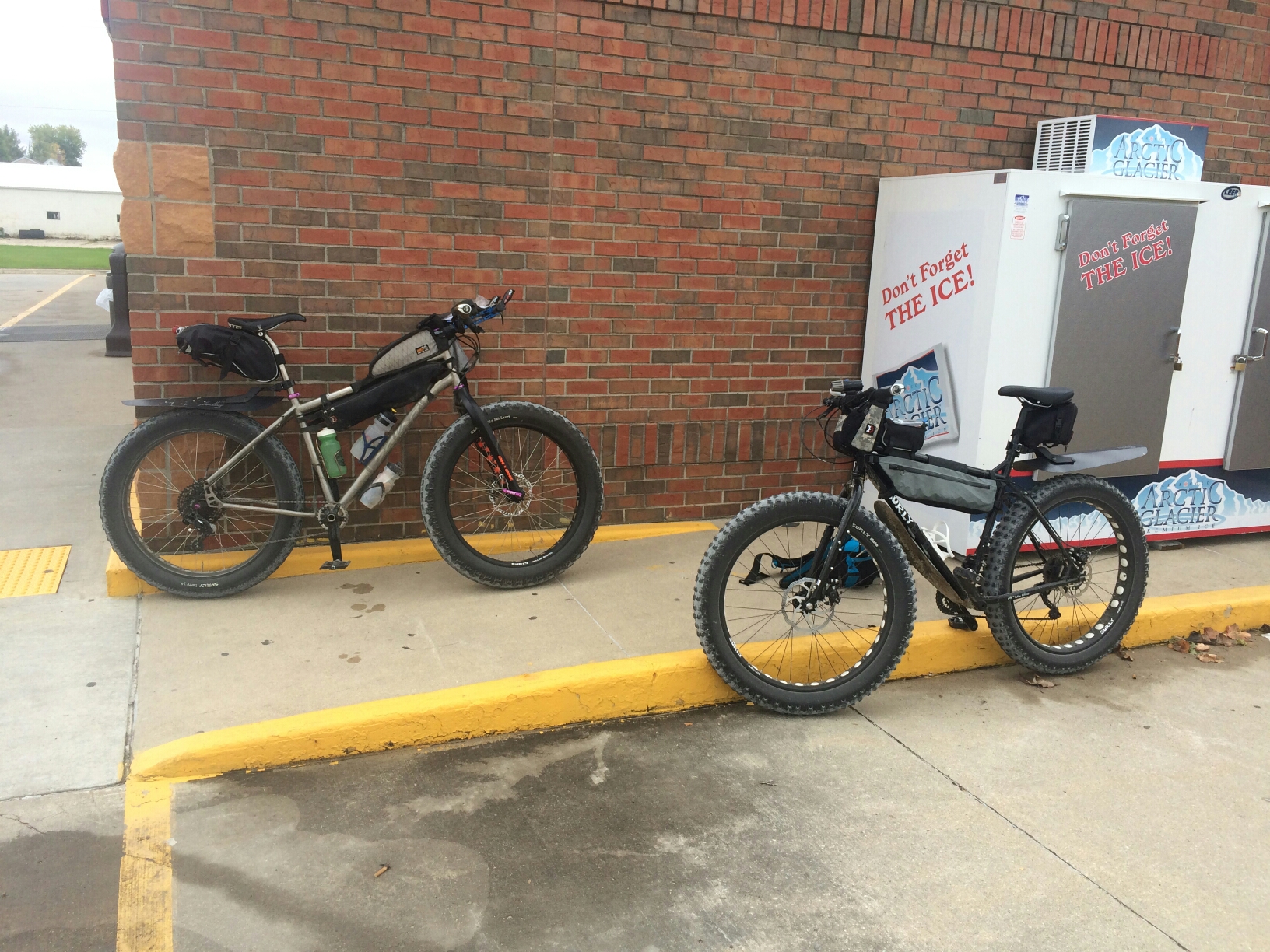 We sat on the curb and refueled before riding through New Hartford and continuing towards Cedar Falls. We stopped at Single Speed Brewing in CF and had a beer before heading for home in Waterloo. As we were riding down the Trolley Trail, I realized that I was closer to my house than I was to my truck, so I headed for my house and Mark headed towards his. It was dark by the time I got home and I had a little over 107 miles on the Garmin.”