“I had a very enjoyable 71 mile ride this past weekend.  Unlike a week ago, the wind was very tame.  It started from the southwest at 9 mph and the temp was in the low thirties.  Balmy!!  Kent, a friend from the riding group I participate in, wanted to tag along to get some fitness.  I decided to load my bike up with everything I’ll need for Actif Epica. I put my extra clothes and supplies in a seat bag and a handle bar bag.  I haven’t ridden with a handle bar bag before, so that was a new experience.  The front end was a little heavier to maneuver.  This was going to be a good test run.

I chose a route similar to the previous weekend to show Kent some of this area.  With the light wind, we had a nice pace going.  We headed east to the little town of Averill, consisting of a grain elevator, church, and a few houses. 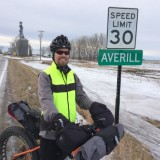 From there, we headed north and eventually west.   With the warmer temps the gravel was soft and gritty.  There were a few sections of the road that had good sized drifts over them.  The snow was hard and crusted enough that we could just ride over them.

At mile 50, we reached the Harwood C store and refueled.  Kent was going to head back to Fargo from this point and I decided to go west to get a few more miles in.

There were a lot of minimum maintenance  roads I would like to have taken, but with the warm temps, they looked pretty soft.  I did attempt one on the way back into town and that was a mistake. Even by riding on the grassy part, I still filled up with mud.  I cleaned as much mud as I could off the rear derailleur and made it home.
Luckily, it still was above freezing, so I took some pails of hot water and cleaned the bike and chain.  It was a great day to be out there and I enjoyed Kent’s company.  A great day on the bike!!”