“This ride had everything – goathead punctures, fierce, soul-battering headwinds … well, that’s about it. There wasn’t much climbing, and no muddy hike-a-bike, but something was off. I had no legs. That was a problem. I had no coffee at breakfast. This could have been part of the problem. I ate not enough breakfast. This could also have been part of the problem.

It was a great route though, very fun. I am starting to have a lot of confidence in my route building prowess (or else rides on North Central Kansas gravel roads are just hard to mess up). I crossed thru the Jamestown Wildlife / Wetlands area on the rocked walking/access path. This may have been officially not allowed; I believe the sign said “Foot Traffic” only. A bicycle is powered by feet, maybe, technically.  The waters were full of cranes, ducks, and geese (rhetorically, could there be more goose poop on this trail?). In the spirit of dubious right-of-ways (rights-of-way?), I *should” have returned home via the canal access paths, but alas, I stuck to our regularly funded county lanes. I will return.

The area up by Lovewell Reservoir was very cool – lots of sharp and rolling hills, an enormous controlled grass burn, and a couple eerie old mostly-abandoned townsites, ghostly shells of broken buildings squatting in the trees. A crumbling red brick school the size of a small factory invited photos and exploration, but I was le tired, and pedalled on. There were not very many photo ops taken, due to my dour mood. 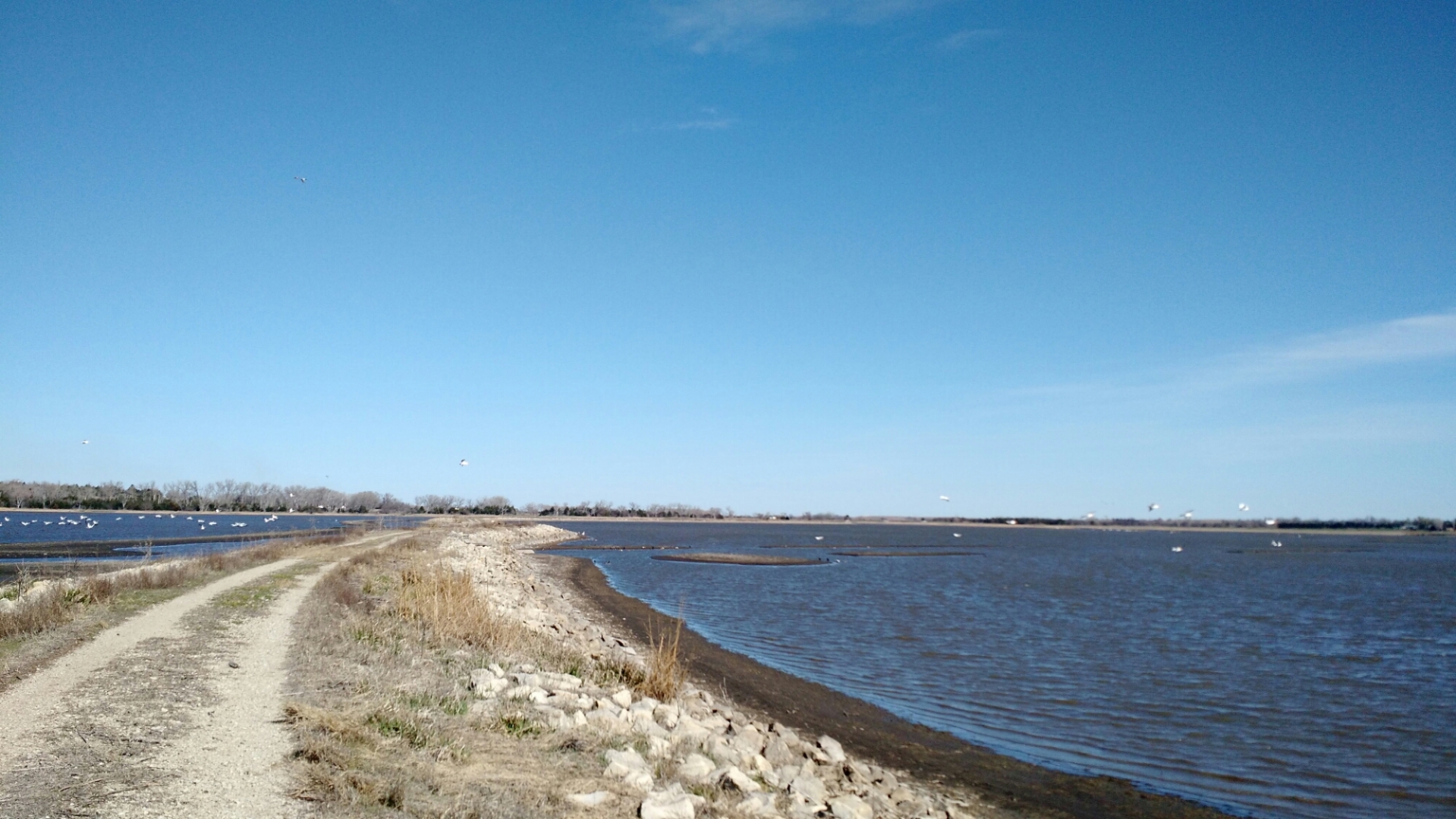 We’ll see how this next weekend goes – the “Gravelleurs’ Raid” in Lawrence, Kansas. DL92 was my own little warmup for GV, with somewhat concerning results. I’m willing to chalk it up to a fluke but also recognize what needs corrected. An exhortation for proper preride nutrition:
‘Wake up you sleepy head / Put on some clothes, shake up your bed / Put another log on the fire for me / I’ve made some breakfast and coffee’.
There are a couple more official, organized rides coming up that I’m sort of using as training and testing for the Big One in June (with an eye on finishing, not placing), getting my bike and body tuned up and dialed in, so “we’ll see”…

Packed into new Banjo Bros handlebar bag: 3 nutty bars, 3 generic electrolyte chew packets, minipump, patch kit, 2 spare tubes, multitool, phone/wallet, and once it/I warmed up, tights and windbreaker. I like it, the bag, so far, but it may be overkill for sub 100 rides, especially when a shop is located on the route, as one was on this occasion – I refilled one water bottle w sports drink and also bought some chz n crackers. It, the bag, is great for commuting, and for remote / long / no supply stop routes. Will I use it, the bag, on these “shorter” “races” -?- well, “we’ll see”…

The bike is and has been a 2016 KHS Urban Xtreme, which is their city commuter model, which naturally I’m using for rural pseudo-randoing. I do commute on it, usually, but it’s prime directive is adventures and grinding, and soon, hopefully, some rackless bikepacking. It’s a nice steel frame, equipped w Claris (meh…) and mechanical disc brakes (yeah!). I’ve got 32mm Soma Panaracer XPress tires on it. I may, in May, put some 35s or 38s on there, give them a whirl.

Bonus takeaway strategy (or is this a tactic?) – next time I’ve got a longish, ambly training ride with a sustained unidirectional wind, I’m gonna try going with the wind for the first half, then looping back and fighting against headwind on the way home. I’m curious so see how this plays out mentally even more than physically.”
-Josiah D.