In the Midwest, they say; if you don’t like the weather, just wait a minute.  This day was no different, except it was the first day of spring, and you’re hopeful for better weather.  While loading my bike, I was reciting (mumbling to myself) the forecast that I heard the night before, “A chance for a brief period of snow flurries, followed by a warming trend with a high of 50 degrees.”  The reality was wet, quarter sized, snowflakes were rapidly covering my yard.  Not to be deterred, I was on a mission to meet Chuck for a morning gravel ride.  As I turned north, up the freeway, my brain was challenging the sanity of my decision to continue. 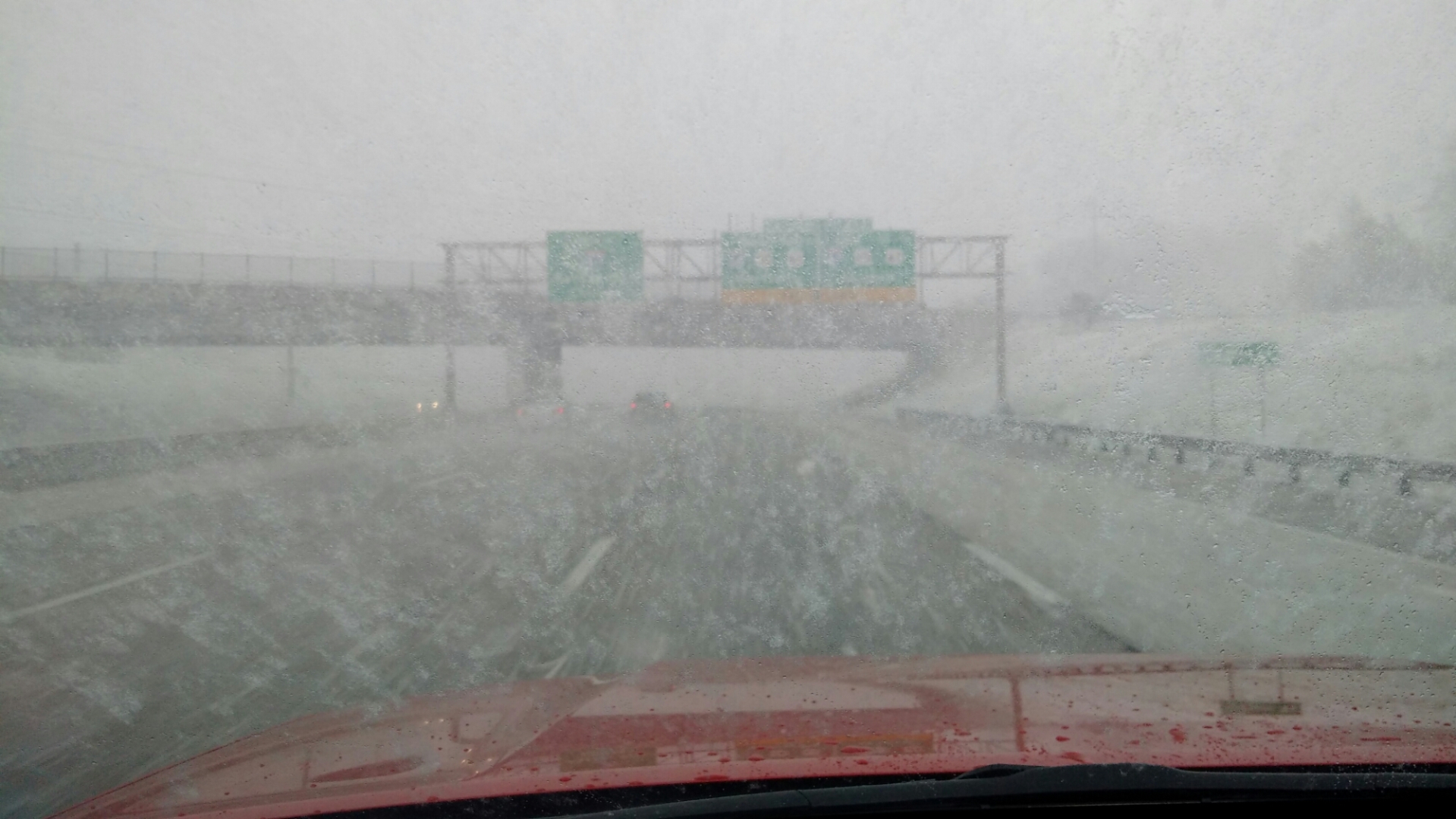 En route the snow thickened.  As I passed Moscow Mills, Missouri the snow suddenly changed to sleet.  Making the turn toward Winfield Lock and Dam, I could see Chuck’s adventure Jeep, in my rear view mirror, just as the precipitation turned to rain.  Not to worry, I was confident that my bike fender was stowed at the ready in the back of the 4Runner (wrong).  Finally stepping out of my truck, I was feeling a little discouraged, realizing that I in fact did not have a fender, and getting slapped by a driving rain as it whipped through the Mississippi River valley.  I promptly launched a plan to stall as I prepped for the ride.  On my first walk to the restroom, a barge was passing through the lock and dam, directly adjacent to the lot we’d parked.  The barge provided a worthy distraction as it was flying an awesome flag with a silhouette of a pioneer trapper, paddling a birch bark canoe.

After about twenty-five minutes of “preparation,” I was walking back from my second trip to the men’s room (killing more time) and the rain mercifully came to an end.  Chuck and I clipped in and were underway.

The Mississippi River valley is flat and wide.  We rode head-on into the wind of the passing cold front toward Foley, MO with but one small grove of trees providing a brief respite.  Once in Foley, we headed west on McIntosh Hill Road, up and over the western bluff, and on toward Blarney Road, apropos so close to St. Patrick’s Day.  This section of gravel was full of great hills, and had a stream meandering alongside the road.  Once we reached Hwy 79, we turned around for an out and back route to Foley.  After Foley, we made our way to the Sandy Island Levee and rode the path back to Winfield Lock and Dam.  Chuck needed to attend a nephew’s birthday party, so we loaded up our bikes and went our separate ways.  Chuck and I had logged 22 miles, and since the sun had finally appeared, I decided I was not finished for the day.

I drove south to a place referred to as “The Mound,” which is popular starting point for local mountain bike and gravel riders as it provides access to several local trails and gravel roads.
The weather was cooperating, and while chilly and windy, there was some sunshine, and it appeared that the snow, sleet and rain had passed.  Soon I was in the saddle, taking a short ride on the Hamburg trail to Busch Memorial Conservation Area.  At Busch, there was a hunting dog field trial underway.  Seeing the dogs work is always impressive but after a few miles through Busch CA, I decided to exit.  Hopping the Busch Greenway, a 5-mile long paved connector trail, I made my way to Katy Trail State Park, which is a 237 mile long rail-to-trail conversion and all gravel…
Riding the Katy for 14-miles brought me to the small town of Augusta, MO, home of Augusta Brewing Company.

This was the perfect spot to turn around, but not without a brief stop for a pint of the Hyde Park Stout.  I hadn’t noticed the thickening clouds when the bartender asked how far I needed to ride to finish for the day.  He then explained that the weather radar was showing more rain moving in from the west, but if I was quick, maybe I’d stay dry.  With that, I strapped on my helmet and hydration pack.  As I stepped out the door onto the patio I was met by a brief round of pea-sized hail. Seriously???
Anyway, the hail was short-lived and so I quickly made tracks up the Katy avoiding any further precipitation for the day.  As the end of the ride neared, I exited the Katy, connecting on another portion of the Hamburg Trail which is mostly gravel double track climbing for the last few miles of the day.
In all, the first day of spring had provided snow, sleet, rain, driving wind, sun, and finally…pea size hail.  Nonetheless, I persevered, putting together a two-part gravel century alongside two of America’s great rivers, The Mighty Mississippi, and the “Big Muddy” Missouri.”
-Steve F.