“My first visit to the flint hills was in 2001 to do a ride called “The flint Hills Death Ride”  After completing the ride I knew I would be back.  Best I can tell I have made a trip to the flint hills 15 times over the past 16 years to do either the Death Ride, Dirty Kanza or both.  The Flint Hills never disappoint.  To try to describe them is unjust.  Taking a photo just doesn’t show the vastness that is out there.  The only way to know what the flint hills is all about is to ride them yourself.

We arrived in KS about 3pm and set up camp.  After a cold one it was off to the riders meeting and then some grub.  Have you ever seen the show Diners, Drive-ins and Dives?  Well Emporia has got one of the best.  It’s called Do-B’s.  I opted for the OMG. (beef burger topped with ¼ pound of pastrami and grilled onions with roasted pepper jack and special sauce)  This place is a must if you are ever in Emporia. 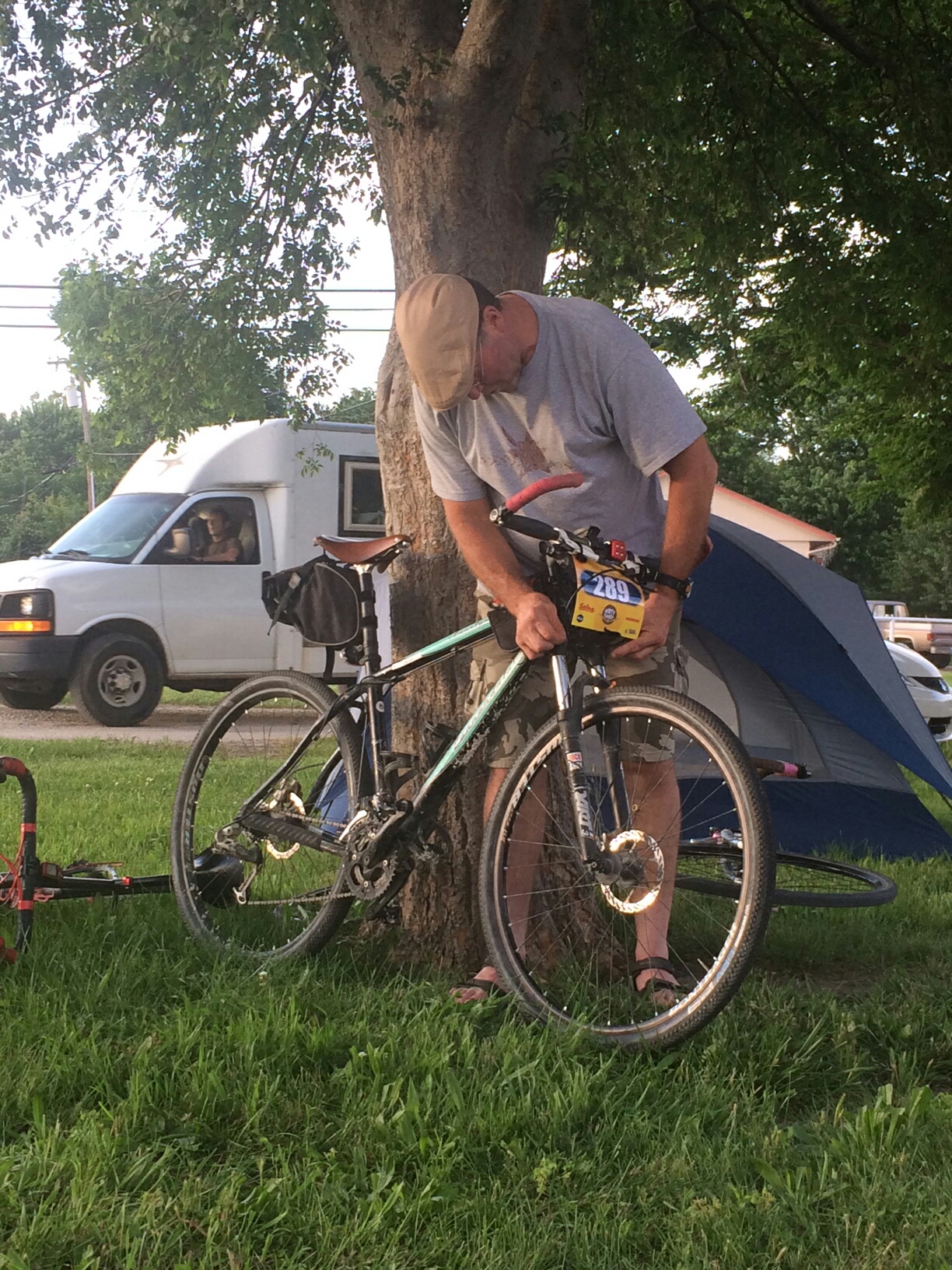 Returning back to camp there was a nice cool breeze that would make for what I thought would be a good night’s sleep.  All was well until about 2AM.  KABOOM!  First the thunder,then the lighting and then the hail.  Visions of last year’s hike a bike version of DK were all I could think of for the next few hours until the rain stopped.

The roll out went smoothly but it did not take long for us to roll up on the first long stretch of water and mud.  As I watched numerous riders fall victim to broken chains and wheels caked with mud I was able to move along un-scarved. As the route continued south the the roads dried up and things were looking brighter.  As I left Madison the temp was beginning to rise and the mild breeze that accompanied us the first 50 became a sometimes scary crosswind along some of the ridges as the route continued to Eureka. Many of the roads to Eureka were familiar.   As I remember they were part of the very first DK.

The stop in Eureka was short.  My crew had found a nice shady spot for me to rest and refuel.  Kudos to Rob and Tonya.  They were awesome!  The second part of this course was a real mind bender.  When you leave the half way point your brain says head North.  I left heading East and then went South again.  This little game was played all the way back to Madison and the Emporia.  Just when I thought I was getting close the route went the other way.  As Madison finally approached the again familiar roads from the first DK gave me a boost of confidence knowing I was that much closer. 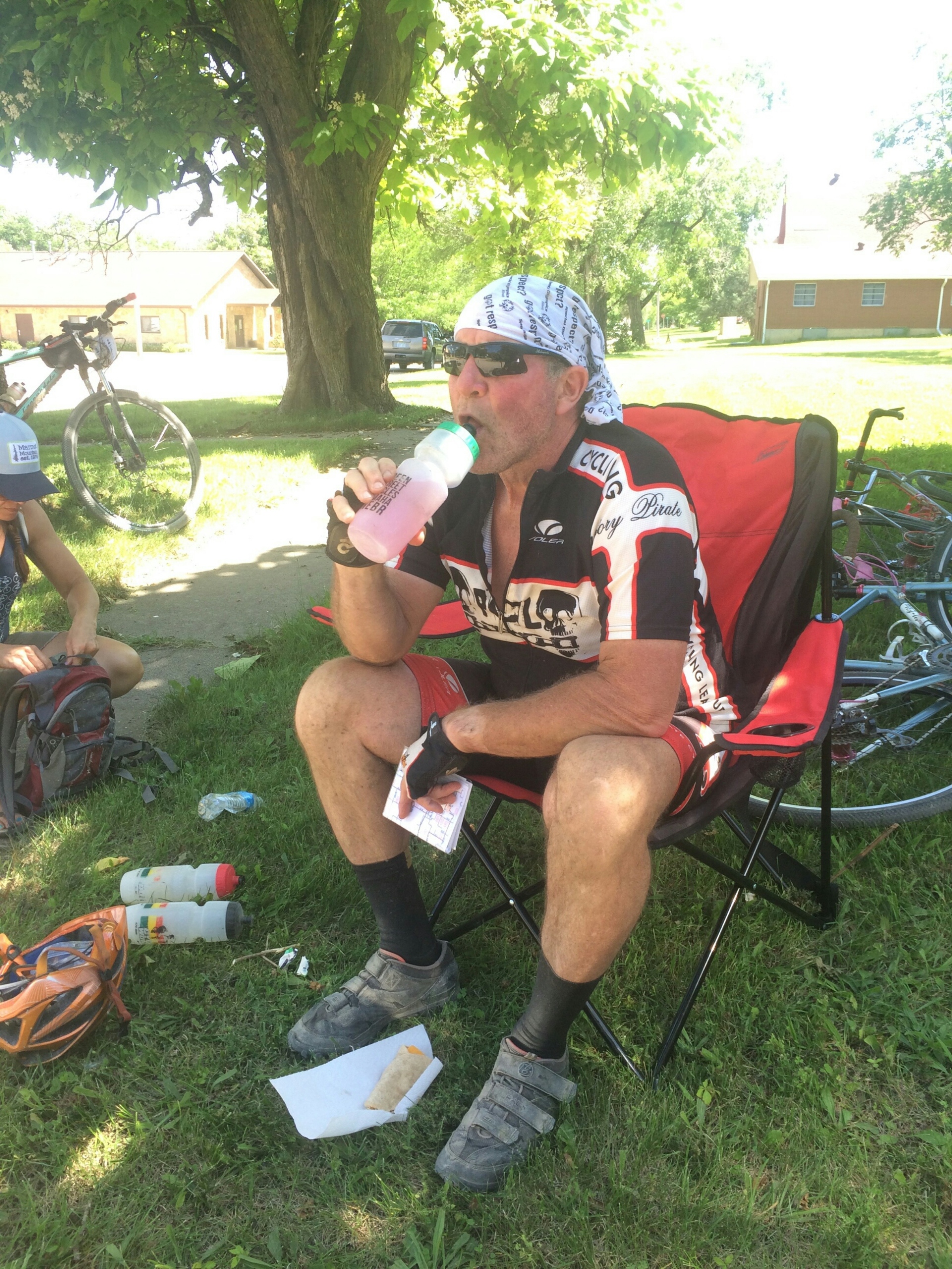 The shortest leg of the day( 46 miles) is what remained.  It gets really dark in the Flint Hills when the moon is not out.  What that means is having to stop at all those tricky intersections to read the map.  I stopped at @ one and the 2 riders with me with garmins had different directions.   Call me old fashion but I still prefer my compass and a map.  We turned right. Zig sagging north towards Emporia the lights of the city came into view.   Heading East again knowning I was less than 3 miles away as the crow flies sucked. Zig sagging North and South back to the RR crossing was also hard.  Being stopped by the train 3 miles out did not matter.  It gave a short  time to reflect a bit.  It had been a long day, but I was going to finish.”