“This past Memorial Day weekend, the gravel grunts headed to Medora, ND for the Badlands 120.  I rode this ride last year, missed a turn, and tagged on an extra 15 miles.  This year, I was determined to stay on course!!  The ride was on Sunday of Memorial Day weekend, so we headed out on Saturday.  We camped out at the Medora campground, which was really close to the finish line.  That night, we went into town, had some dinner and met some fellow riders. 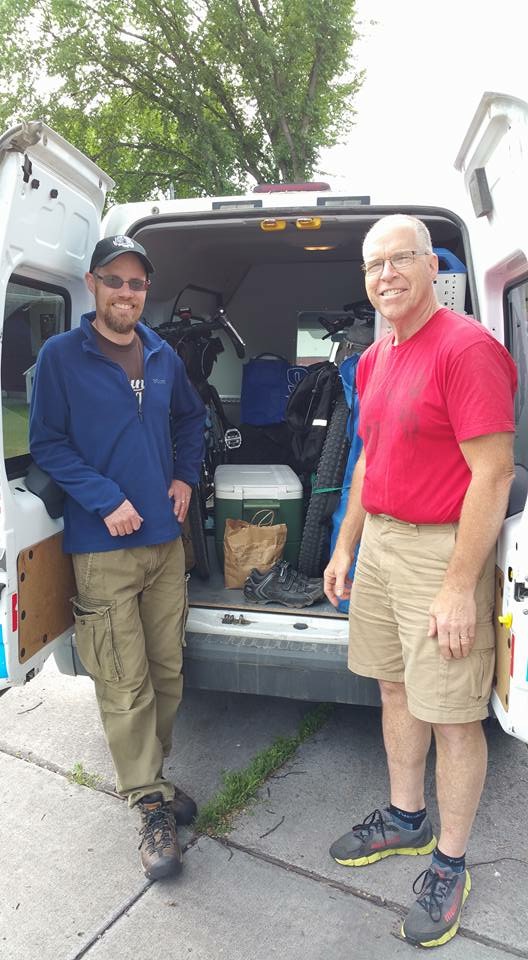 The next morning came quickly and we packed our drop bags and other stuff together.  The race started at 8:00am and we were led through the northern unit of Theodore Roosevelt National Park.  This was a 10 mile lead out on pavement.  The convoy had to stop a couple of times to let some buffalo pass.  We hit the gravel and immediately were climbing a nice hill.  This was the theme for the day,  hills and beautiful, rugged country.  The first aid station was at mile 32.  I picked up my drop bag items and continued on.  Things were going well and everyone had settled into their pace.  This was also the turn off for the people doing the 77 mile event.

During the next section, before the second checkpoint at mile 57, the terrain became more prairie like. It was also around this time I was going down a good sized hill and heard a strange noise.  I looked at the bike and everything seemed fine.  It was a couple of miles later that I was looking at my Banjo Brothers cue sheet holder and realized my cue sheets had blown out.  Crap!!  That was the noise I heard earlier.  I had the course downloaded into my bike computer and the course was marked so I didn’t go back to find them.  I was hoping this wouldn’t become a problem because I did not want to stray off course this year

I made it to check point two at mile 57 and replenished my calories and liquids.  I took a few minutes to regroup and headed out.  It was around this time that my Brooks C17 I picked up this spring was starting to give me issues with saddle soreness.  I had experienced the same thing on the Royal 162 and some training rides.  I made a few adjustments to see if that would help, but it wasn’t looking like it.  By mile 70, I knew this relationship was over.  This would be its final ride with me.  It’s a beautiful seat and well made, but just not built for me.  There were a couple of big climbs around this time and the temp was beginning to rise.

I made it to check point three which has a river crossing.  I lifted the bike up and crossed over.  The water was below knee level at the deepest part.  It was maybe fifty feet wide.  I picked up my drop bag and refueled.  I headed out and my mind was totally focusing on that damn seat. For the next 24 miles, I knew I wasn’t drinking or eating enough. I thought I was staying on top of it, but fatigue was setting in and I ended up walking a couple big hills.  I was trying to remember when the next check point was.  My cue cards were gone, but I thought it was at mile 93.  It turned out to be mile 98 or 99.

I made it to the check point and the wonderful people there offered me a chair to rest for a bit and a wet towel.  Awesome!!  I must have looked a little rough and one of the volunteers asked if I wanted to continue.  I thought for a second, maybe I should drop and then thought I have plenty of time and I’ll trudge it out the last 20 miles.  I continued on and slugged it out on the climbs and enjoyed the downhills.  I made it to the finish and waited to hear from my fellow gravel grunt Tim.  It turned out to be a tougher ride on me than last year, but with such beautiful scenery I can’t complain!”
-Ryan H.