“I’m a little behind with posting some rides, so here’s my one from the 4th of July.  I was staying at the family cabin on East Silent Lake, MN and decided to ride into Pelican Rapids by hopping on part of the Woodchipper 100 route.  It was basically a 32 mile out and back.  It was a beautiful morning and the temp was cool.  The gravel was pretty chunky and loose.  This was my first longer ride on my new Selle Anatomica NXS seat.  It worked great.  I refueled in Pelican and headed back.  I stopped at an old cemetery on the way back . This was a fairly old cemetery with the most recent grave from 1958.  There was one grave with an American flag.  He was a World War One vet who died in 1927.  I thanked him for his service and headed back to the cabin and enjoyed the rest of the day with family.

Originally, the weekend of July 23rd I had planned to do the Dirty Lemming Ride.  The ride was moved to July 30th and I had a wedding to attend that day, so I was unable to do it.  I had Friday the 22nd off from work, so I thought I would do a gravel century that day.  That fell apart because I was sick earlier in the week and knew my body wouldn’t want to go out for a full hundred.   I decided I would stick around the Fargo area and do a metric.  It was really humid and warm that morning and I was glad to be doing the 62 miles.  It was a familiar route I had ridden this past winter, but now there were crops growing and green landscapes!! 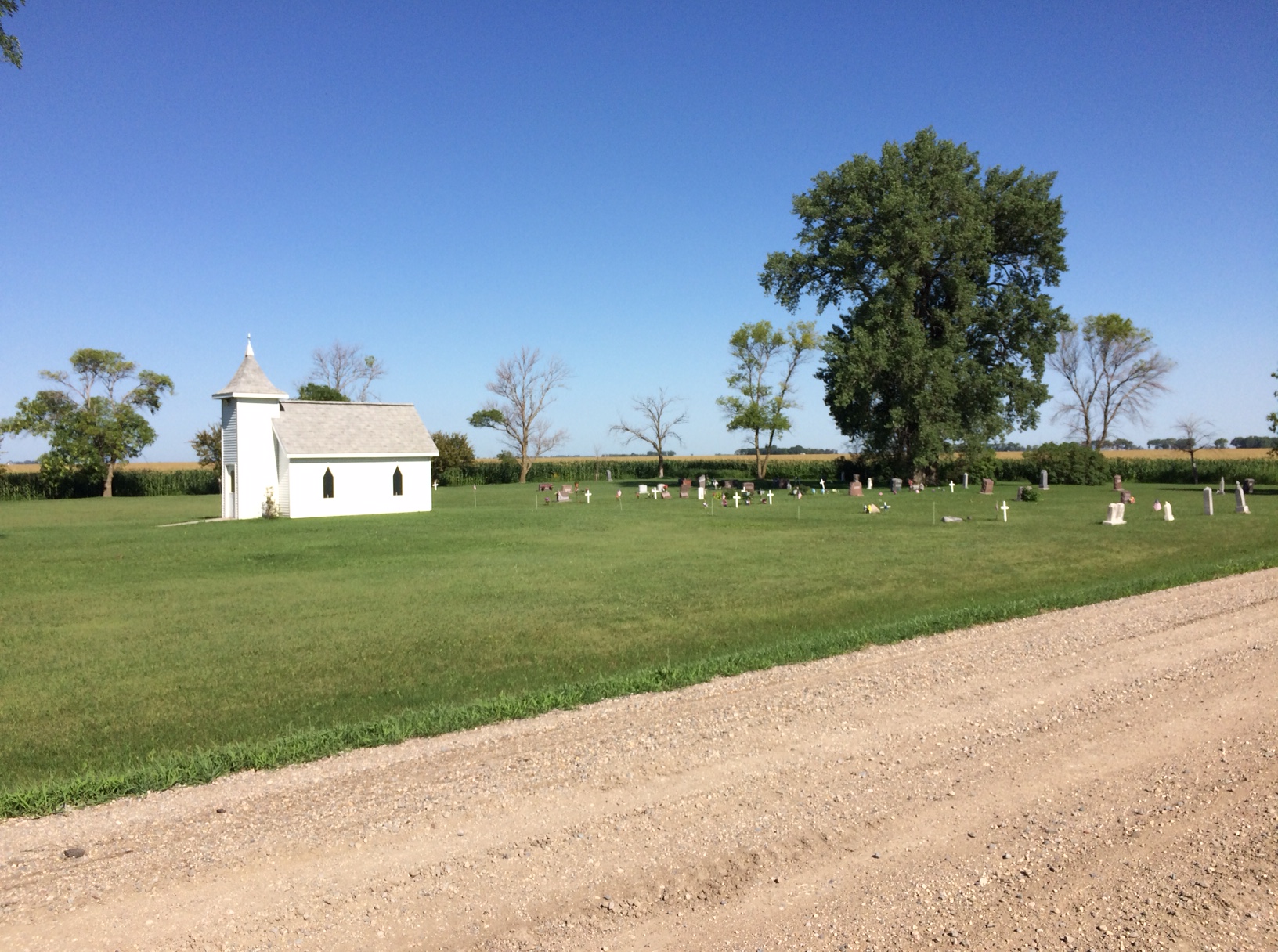 The first weekend of August, the gravel grunts decided to head to the Sheyenne Grasslands to do some riding.  I hadn’t ridden the fatbike since Lutsen, so I thought it was time to get reacquainted with it. The Grasslands is a  great place that the North Country Trail goes through. It’s only an hour away from the Fargo area.  It has a mix of praire, sand, and woods.  There are quite a few cattle out there, so that means cow poop!!

We headed out Friday morning and hit the trail early afternoon.  We spent the rest of the afternoon exploring some back gravel roads.  That night we stayed at the campground and I slept in a bivy I had just purchased.  This was my first time in a bivy and it reminded me of being in an MRI machine.  Some time during the night, my outside cover fell down over my mesh screen and I woke up wondering WTF!!  I quickly came to my senses and fell back to sleep for the rest of the night.  I just need to sleep in it a few more times to get used to it.

On Saturday morning we got up and headed out on the trail.  We were going to ride to the West trail head and come back.  It would be 32 miles there and 32 back.  We stashed some water the day before at the turnaround point, because there were no water stops along the way.  It was a fairly warm day.  We encountered some cattle on the trail and Tim showed me how to get them out of the way.  Basically yell!!  The fatbike and terrain gave me a great work out and it was a fun weekend.

I wanted to get a gravel century in for the month of August, so I decided to ride the Woodchipper 100 course again.  I also thought this would be a great test for my Selle Anatomica seat.  I had Monday the 15th off from work, so I headed out to Rollag.  As I started the ride, I noticed there were some pretty dark clouds to the south. For the first 40 miles the temp was nice and I thought I might luck out with no rain.  As I was refueling in the town of Vergas, the cashier made the comment there was quite of bit of rain headed this way.  Shortly after I left the C store the rain started.  Luckily the temp was around 70, so being cold wasn’t an issue.  As I was working my way through the Maplewood State Park area, the gravel was turning into the consistency of peanut butter.  My drivetrain was also shifting badly.  I sacrificed a bottle of water to try to clean it and also put a grocery bag over my leather seat.  By the time I arrived in Pelican Rapids at mile 90, the rain had stopped and the sun came out.  I refueled at the C store and finished the course.  I ended up with 114 miles.  It was a good day!!” 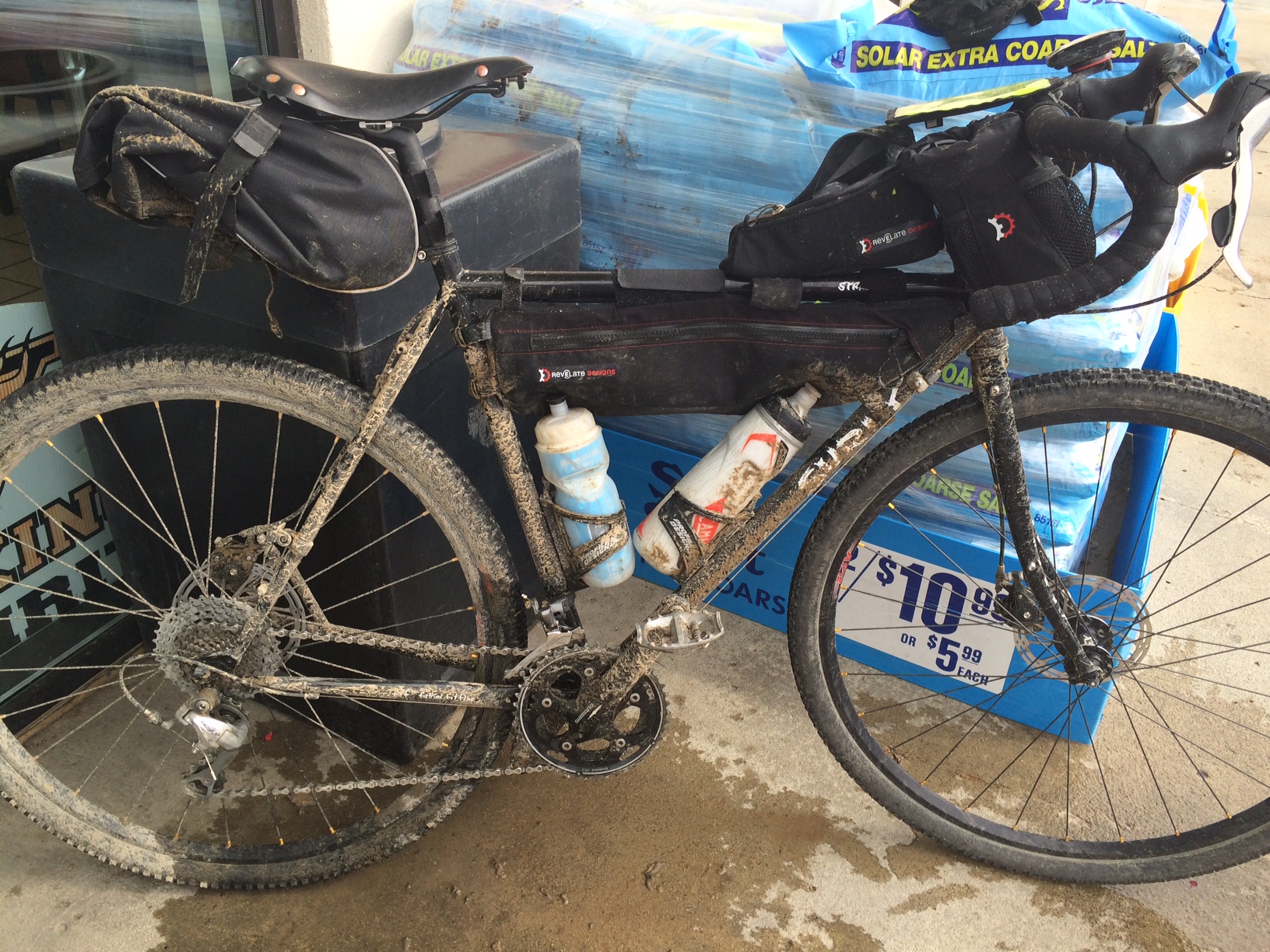