“To my Cup O Dirt Fans,
I tried to finish it off the challenge this weekend with 185+ miles of gravel goodness in the heart of Missouri on the KATY Trail.  I came up short due to unseasonably hot weekend, wind and time.  So I started this adventure by waking my butt up at 2am and driving 6hrs to Sedalia and then hoping on the Amtrak to Washington and getting off the train there.  As I was saddling up to go across the bridge to Dutzow, I was offered a ride by Russ and his wife Clair.  Yeah random bike people looking out for me yet again.  Well I found out why they offered me a ride, yeah dumb choice thinking I was going to be safe crossing that narrow non-side walk bridge at 1pm on a Sunday.  I got dropped off, and then pedaled onward west. I was planning on lunch at a few spots, and unfortunately they were all closed early.  So I kept going, that was a huge mistake.  I blew up so hard and could barely keep going, I needed fuel and that camelback I had was heating me hotter than a sun drop.  I pulled off into Portland, and had the best Burger of my life.

So after I made the assessment that camping on the trail was not the smartest decision, I moved on to Jeff City an got a nice cushy hotel room. I woke up and got in trouble at breakfast.  I evidently was not suppose to eat till 6:30 but the buffet line of eggs and hash browns were unguarded and it was 6:20 and no one was around, so I dove in.  The waitress came out and looked at me, and I asked “Am I in trouble Ma’am?” She smiled and said, no you used the word Ma”am, you are forgiven and thank you for having manners.  I smiled and left her a good tip.  The other cyclists were standing around watching me eat, and they moseyed in and asked how I was able to get in early. I said simple, I used manners and was apologetic.

With 75miles done, trying to rehydrate and on a full belly, I decided to push on at 6:43am.  I got across the river and back on the trail, I felt lonely again, being the only westward passenger on these old rail lines.  I started humming some Arlo Guthrie.  Except I was not riding on the New Orleans.  I had about 90 miles to chew on for the day.  I pulled in to Rocheport and felt the need to snack, I forgot this is the off season and all services in the morning were closed, so I pedaled another 8 miles to New Franklin.  I pulled into town and went to the Casey’s gas station. I sat outside with some chocolate milk and orange juice.  I found myself chatting with a old timer, he brought me out a donut and we chatted about god knows what.  Dude gave me a donut I was going to listen to anything he said. 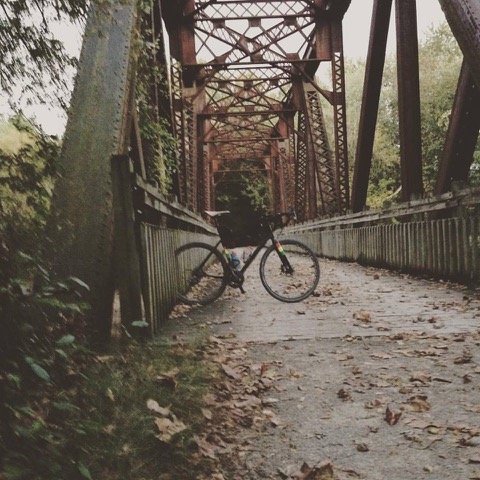 I was making good time, not great with the strong south winds but good timing. I was hoping to close this up by 1pm. Wrong, I turned south west and that wind and constant grade of climbing took it to me.  I had to pedal into Boonevile across the Missouri River.  Yes I had to pedal into Booneville.  For the third time, I had to pedal into Booneville.  The wind was that strong.  I sat down at the station and had a Red Bull refilled my waters.  So I went to pilot grove, stopped at the Casey’s and refueled.  Thinking 25 miles left I got this.  I ran out of water with 6 miles left to Sedalia.  Yes, the temps were that high and the sun was that punishing fall sun that slowly sucks you dry. I muscled it to Sedalia, and I found myself at a drinking fountain for what seemed long enough to drain a small lake.  I was done, I thought.  I pedaled back to the Amtrak station and changed in the parking lot and drove my happy self back to Iowa.
So evidently my friends were Strava stalking me, because about 5mins after the ride posted the cheers and congratulations came in.  I settled for 165 miles in lieu of the 189 I wanted to get my final 3 metrics in.  The wind and temps were too much.  So I am going to get the last one this weekend.”