Melissa Hunter wrote in to share her story, and it’s one worth reading…

I took up running in 2010 after being unhealthy forever and having a “come to Jesus” conversation with my doctor. I pushed through a few marathons in short time despite my body’s protests and earned myself a stress fracture so bad my left heel was “shattered”, then double foot surgeries on the right foot about a year later.  Cue months of not being able to walk, weight gain, divorce, depression.  I bought a handbike and started turning things around, chalking up two handbike (paved) metric centuries in 2013, losing weight, and generally getting my shattered life back in order.

In mid 2013 and throughout 2014, I picked up speed collecting bikes and adding miles.  I rode my first gravel metric century on Father’s Day weekend with my dad and deemed it his present, and he was absolutely thrilled. 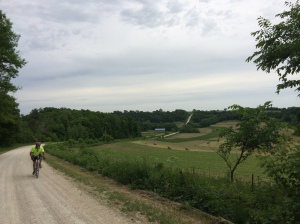 I also racked up my first roadie century and later that fall a gravel century. As I rode more unpaved miles, I lamented that Cup O Dirt didn’t exist anymore because DAMMIT I wanted my own mug! If dear old dad could ride 100 gravel metrics in a year, certainly I could pull off a measly twelve, right?!

This year, the fine folks of Cup O Dirt came through and here we are!  I’ve done two gravel metrics so far this year (write ups and a few pictures to come), but for tonight I just wanted to introduce myself. Happy riding, everyone!”

Thanks for sharing, Melissa! I’m betting you’re one of the few out there that have completed centuries by handbike and peddle power. We look forward to hearing about your pursuit of the cup.

Do you have an introduction or story about how you found cycling (or it found you)? We’d love to hear it. Just shoot us an e-mail and we’ll share as little or as much as you’d like.

One thought on “Meet Melissa”